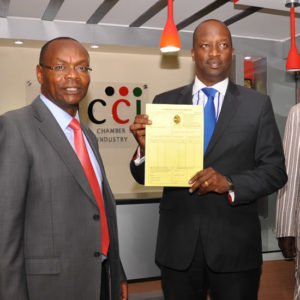 The National Chairman of Kenya National Chamber of Commerce and Industry (KNCCI), Mr. Kiprono Kittony and the Managing Director, Kenya Bureau of Standards (KEBS), Mr. Charles Ongwae, in 2014 announced that the issuance of the Certificate of Origin will be solely done by the Kenya Chambers of Commerce with effect from 1st July 2014. This effectively gives the Chamber the mandate to issue the document to all exporters of goods originating from Kenya. Previously Issuance of Certificates of Origin was moved from KNCCI in 2005 to KEBS following restructuring and reorganization of the Chamber.